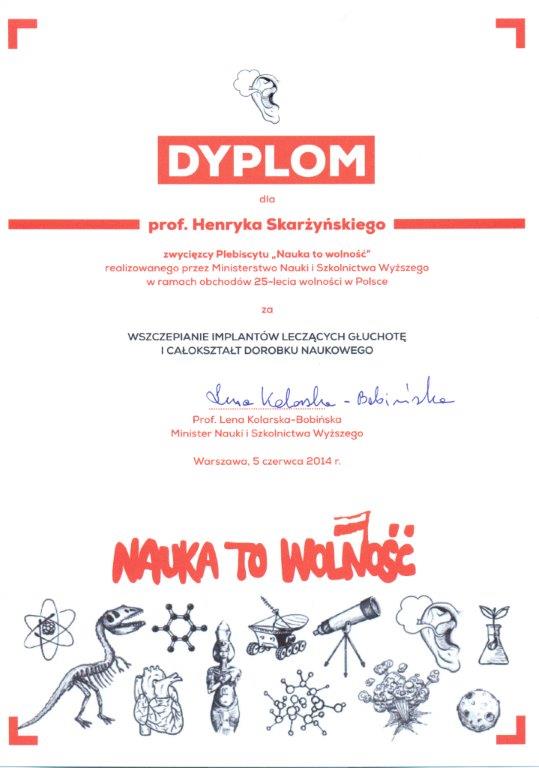 The most important scientific achievement in the last 25 years is the implant surgery in partially-deaf people performed by the team of professor Henryk Skarzynski – this is the opinion of internauts who voted in the “Science means freedom” plebiscite, organized by the Ministry of Science and Higher Education.

– The achievements of the last 25 years include scientific works. This is why we organized a competition for the most interesting innovations. – said the Minister of Science and Higher Education, professor Lena Kolarska-Bobinska, during a press conference. – We learn the science that is open for the society, local authorities, organizations, industry. – she said.

– Our future depends on the science – noted the undersecretary of state at the Ministry of Science and Higher Education, professor Włodzimierz Duch. – It seems to me that this information does not reach to the people through the media. The future of the economy depends on the advances in the science. – he said.

In the online plebiscite, internauts could vote for one of 25 important innovations and events of the last twenty-five years. The works of professor Henryk Skarzynski gathered together 747 votes which is 22% of all votes.

– This is my second such important prize in the last few days. In the “People of freedom” plebiscite of the TVN television and Gazeta Wyborcza, I was conferred the title of the “man of freedom” in the category of science. Both awards refer to the beautiful anniversary of our country – 25 years of freedom. For the last 25 years we have had the chance to be where we want and do what we can. We have achieved a lot in both the science and clinical medicine. Our success is the opportunity to present Poland from its best side. – said professor Henryk Skarzynki, a world-famous otosurgeon, expert in otorhinolaryngology, audiology and phoniatrics.

In 1992 the development of the program of total (both congenial and acquired) deafness treatment with the use of cochlear implantation changed the standards in the Polish otolaryngology thoroughly.

– In the last decade we not only matched up to the European centers, but also joined the lead. In 2002 I performed the first in the world cochlear implantation in a partially-deaf adult and in 2004 – in a child. This started a new chapter in the world science and medicine, and Polish patients were  the first in the world to get the access to the modern treatment technologies. – said the laureate. – For the last few years many more medical technologies have been developed. Gradually, we have implemented all of them in the Institute of Physiology and Pathology of Hearing. This is why our patients were always first or one of the firsts to get the chance of the most effective treatment. For many years we have performed the highest number of surgeries to improve hearing and we take care of the most numerous group of patients with various types of hearing aiding devices.

Apart from scintific achivements, i.a. the development of the new electrode used in cochlear implantation in partially-deaf patients, professor Henryk Skarzynski is also famous from his organizational works. In 2012 his efforts resulted in the opening of the World Hearing Centre in Kajetany. This place is the first in the world to provide the total service in the fields of diagnostics, treatment and rehabilitation of people with hearing, voice and balance disorders.

– We initiated the network of the leading centres from all continents. Today the network comprises over 50 centers. We are also active in Europe. During the Polish Presidency of the EU, our efforts brought about European scientific consensus on early detection of hearing, vision and speech disorders in children. This document resulted in the EU conclusion. Currently, on its basis the European Commission proclaims grant proposals. This money will be spent on the biggest prophylactic program covering 6- and 7-year-olds in Europe. Simultaneously we promote our scientific and organizational achievements in the Central Asia and Western Africa. Our solutions in screening examinations of hearing and speech disorders are the best things that Europe can offer in this field. – said professor Henryk Skarzynski.

The second place in the plebiscite belonged to the project of the precise distance measurement to the Large Magellanic Cloud and its public announcement in the “Nature” weekly magazine (in March 2013). The project gathered together 594 votes. The third prize – with 369 votes – went to professor Bogdan Marciniec for detecting new reactions and catalysts in the production of organosilicon compounds of industrial importance.

Apart from the winning projects, the plebiscite list contained i.a. establishing of the Copernicus Science Center, Foundation for Polish Science – the biggest non-governmental non-profit organization supporting research studies in Poland, successes of Polish IT specialists in international competitions, Polish contribution to the works of CERN that resulted in the discovery of the Higgs particle, student project of the PW-Sat (an artificial satellite), professor Aleksander Wolszczana’s discovery of the first planets not dependable from the Solar System, Włodzimierz Strupiński’s technique of the graphene production, successes of Polish surgeons who for the first time in Poland performed a face transplant in 2013 in the Oncology Institute in Gliwice.